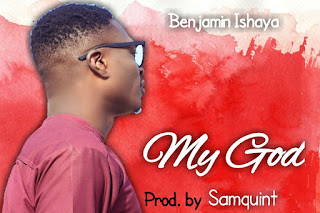 As 2021 begins, I present this new single from Benjamin Ishaya popularly known as Minister Bennysings and it is titled "My God".

The song which happens to be Bennysings' first single came as a result of God's faithfulness through the hurdles of life the young minister had to face.

He received the song in September 2018 and had to wait patiently until God gave him the go ahead to release the song.

In the words of Minister Bennysings ahead of the release of "My God", he said:

"It came to a point where I felt like going into the world but God showed up for me, melting away every desire and inclination for the world."

He further said that:

"I was experiencing failures with so many persons promising me and never fulfilling their promises and I lost hope on men and when I turned to God, He made me a victor."

Bennysings "My God" is a reminder of a decision we all have to make as seen in Joshua 24:15.

We must not linger between two opinions but make up our minds to choose God.

Jesus made it clear in Matthew 6:24 that it is impossible to serve two masters. We cannot serve God and Mammon.

The kind of doggedness we must showcase when it comes to choosing God is the kind exhibited by Shadrach, Meshach, and Abegnego when they were faced with the fiery furnace.

They choose death rather than bowing to the golden stature Nebuchadnezzar had erected. Even if God was not going to save them, their resolve was firm.

Minister Bennysings believes this song will create the needed consciousness in the hearts of believers and draw them into the realm of making God the only priority.

This new year, it is important to choose God in every ramification of our life as His guidance is all we need to scale through the year.

The song which happens to be Bennysings' first single was produced by Sam Quintz.

Download and listen to My God by Bennysings as we celebrate the Yuletide season remembering God is behind all we have enjoyed.

Benjamin Ishaya who goes by the name  Bennysings is Ham by tribe from Kaduna state, Northern Nigeria.

He was born on April 17th to the family of Mr and Mrs Ishaya Joji.

One out of two siblings, Benjamin Ishaya is currently studying at the Ibrahim Badamasi University (IBB), Lapai.

The song "My God" is Bennysings first single in his musical career.

Brodrick Emmanuel Ebube (BEE) is a content writer and teacher, founder of Gospelcaster where he shares answers to questions bothering around the Christian Faith. Contact him via any of the social media icons below.